I believe that life is motion and learning. To live and survive, we must be able to move from place to place and interact with the world around us. In this movement and interaction lies an important opportunity, the opportunity to learn through experience. As a coach, teacher, and lifelong learner, I hope to guide people’s movements and interactions so that they may learn by experience and develop into contributing members of teams, communities, and society. This idea of life and learning through experience is the foundation of my ever-evolving coaching beliefs and the Journey that we take together.

Life is a journey, and Renegade Rowing is a way for people to experience the journey.  Our mission is to develop a healthy community of firsthand athletes by combining the best of rowing, fitness, and strength training through competition.  As a member of the Renegade Rowing community you will build general physical preparedness and enable rowing specific skill.  Life is more fun when you can continually improve and challenge both yourself and others.  This post will give you some insight into the journey of a few Renegades and how you might become part of the Renegade Rowing Community.

Bob and Coach Pat attacking the 2k at CRASH-B 2014

I first met Bob in 2012.  He was just starting to get into the sport of rowing and was participating in a recreational rowing program three times a week learning how to sweep row (8 Rowers, 8 Oars, 1 Oar Each).  He fell in love with the sport and started rowing at the boathouse almost everyday.  In the winter of 2012/2013 Bob realized that rowing everyday wasn’t enough for him because he had never been an athlete prior to picking up rowing and was lacking strength and general physical preparedness.  Rather than trudge away and continue to flirt with overuse injuries, he decided to join the Renegade Rowing Club once a week and develop his skills and ability to work at a higher intensity.  At this point he became an R1 Renegade Athlete.  He trained with us once a week through the winter, in addition to regular rowing at the boathouse, and then competed in CRASH-B’s for the first time.

In 2014 Bob decided he was ready for more and kicked it up a notch.  He tried out for and made the CRI Men’s Masters Crew Team.  He also became an avid sculler (1 Rower, 2 Oars).  Throughout the Summer he competed at regional regattas in both sweeping and sculling.  He ended the Fall season in a big way by racing a single at the Head of the Charles Regatta for the first time.  The thing I love about Bob is that he’s committed to maintaining and improving not only his rowing prowess, but his athleticism in general.  He became a regular member at CrossFit Boston, partakes in CFB Classes 2-3 times per week, trains with the Renegade Rowing Club once a week, all in addition to rowing with the CRI Crew Team on Monday, Wednesday, and Friday.  Bob is looking forward to CRASH-B’s again this Winter and continues to train as an R3 Renegade Athlete.

I first started working with the Boston College Men’s Rowing Team in the Fall of 2013.  As college rowers they train about 6 days per week and when there’s no ice on the river they are in boats trying to master the skill and discipline required of elite oarsmen.  Because water time as a college rower is so important we decided to make sure they were always getting some time in the boat, even if they needed to lift or train in the gym.  That Fall they did a swing row to and from the gym to get their water time in, but then spent a solid 45 minutes, twice a week, learning how to lift properly and push themselves as athletes.  The Varsity Boat placed 18th in the 2013 Head of the Charles Regatta and 5th in the Petite Final at the ACRA National Championships. 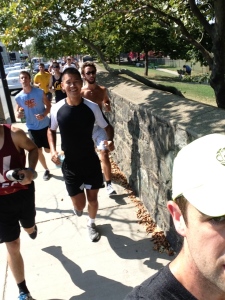 BC Men’s Crew and I doing a Row, Run, WOD, Run, Row! Training as a team raises both intensity and fun!

This year I brought Renegade Rowing to the boathouse and we were able to fit in all three blocks in one two-hour practice.  Half the team, about 12-15 guys, spent the first half of practice working with me on the strength block and the strength and conditioning block.  The other half of the team was out on the water in small boats getting in a rowing block.  Half way through practice the two groups would switch so everyone was able to lift and row.  Our typical setup was Tuesday and Thursday in the gym and on the water in small boats, thus getting in a total of 6 blocks for the R2 Renegade Athlete  This year the BC Men placed 8th in the collegiate 8+ event at the Head of the Charles and they’re training hard this Winter to make the Grand Final at National Championships in May.

Ward, aka “Jurassic”, is one of our first official Satellite Members of the Renegade Rowing Club.  Here’s what Ward is all about…

“I’m a 67-year-old bag-of-bones who, as a lark, decided to train & row a competitive 2K last year.  Am 6’6’’, 184 lbs. (10 lbs. underweight) with a hydrostatic body fat % of 15.0.  Just beginning my 5th year of CrossFit.  Am competent but have mobility issues.  Hips will go below parallel for wall balls and air squats, but not if I have to hold something overhead; then it’s just to the power position.

I have an annual membership w/ my CF box and starting this week am doing Pilates once a week; both to learn something new and to try to improve on my flexibility.

WOD’s per WEEK: – last year did 2 RRC WODS/ per week which will again happen this year with the hopes to consistently getting three RRC WODs per week.

What a great adventure we have ahead of us. Thank you for making the effort to include a satellite member.

So, we’re very excited to have Ward training at the R3 Renegade Athlete level.  He will be doing 3 Rowing Blocks per week in addition to 3 CF Classes and a Pilates Class, which will count for his 3 Strength and Conditioning Blocks and 3 Strength Blocks.  Keep up the awesome work Ward!

Here’s an example of a long time rower adopting the Renegade Rowing Training Plan to train for a trail running race.  Here’s what Bill has to say about our plan and how he plans to use it…

“I’m a 53-year-old on the water rower and occasional racer(not very fast) from New Hampshire and hadn’t been to your site in many months. I was there last week and was very impressed by the amount and quality of your content.

I am adapting your program to train for an 8 mile running race called 8 Tough Miles, which takes place in St. John in the Virgin Islands this coming February. I’m doing the race with my daughter who lives on St. Thomas. It’s only 8 miles but the first 4 miles have an average grade of 5%.

I found your template and your post “What kind of Renegade are you?” extremely helpful in arranging my training. I put myself in the R3 Category which matches well with the amount of time I have to train. Also, as it has only one endurance block, that will be helpful as I’ve started to develop Achilles tendonitis, probably from running too much.”

Great to have you on board Bill!  Good luck with the training and keep us updated on your progress!

Last, but definitely not least, we have Drew who is a 32-year-old masters rower knocking on the door of the elite.  This year Drew decided to switch from the long slow distance model of rowing and mix in more lifting and high intensity intervals.  At the Head of the Charles he finished Second in the Masters 1x event and he’s fired up to train for the National Selection Regatta next Spring.  Drew is a rowing coach himself and is able to find time in the mornings to get in all of his training.  For the Head of the Charles he was lifting three days a week and putting in anywhere from 2-4 metcons a week in addition to rowing on the water 3-4 times per week.  This winter he’ll be training at the R4 Renegade Athlete Level and we are all excited to push him farther than he’s ever gone before.

If you are thinking about switching it up and using Renegade Rowing to meet your goals, please let us know if you have any questions and feel free to get in touch with me – pat@renegaderowing.com.  We’d love to have you join our crew and experience the journey!

8 thoughts on “Where are you on your Journey? Here are some Renegade Rowers just like you.”

What do you think? Post comments here: Cancel reply

This site uses Akismet to reduce spam. Learn how your comment data is processed.