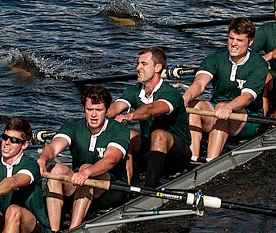 The last time we performed the CF Rowing Total was in March and I wrote the following post.  I wanted to see where everyone is at before testing our 5k next week.  The CF Rowing Total is meant to test your power and strength in the 1 minute range on the erg.  It’s also an opportunity to test your functional strength.

Many countries post national standards that athletes need to hit in order to tryout for the national team.  Below I’ve linked to the standards posted online by US Rowing and Rowing Canada.  In the coming month I hope to define Renegade Rowing standards for athletes looking to be competitive in both Rowing and CrossFit.  A good starting place is for athletes to see how they compare to elite rowers.  It’s a goal of mine to find a group of athletes that can train regularly on the water and in the gym without having to rely on hours and hours of steady state.  Would you like to help me?  How far off are you on the 1 minute test, 2k, and 6k?  Feel free to share your thoughts on the subject and what you’d like me to include in the Renegade Rowing Standards.

After doing a dynamic warmup, do a good 10 minute warmup on the erg where you build up to race pace above a stroke rating of 30 for a few bursts.  When you’re ready to go, set the monitor for intervals time with 1 minute on, 4 minutes off.  The goal is to do as much work as possible in a minute.  Be sure to paddle for a minute after each attempt to help your body deal with any lactic acid that may start to build up.

The stroke rating is open, but keep good form.  Don’t compromise you’re body.  Maintain a strong posture at all times.  Anyone can pull hard for a few strokes, but those with functional rowing form can build throughout the minute test, stay safe, and produce the most power.

In rowing there are three things you can vary to go faster.  Force, distance, and time.  The best rowers know how to combine all three… row harder, row longer, and row faster.  Basically, put more force into the handle, row as long as possible every stroke without compromising your body, and increase the stroke rating.

After making three attempts on the erg, setup for and perform the three lifts.  Make sure to roll out your back, hips, and hamstrings as needed in between lifts. 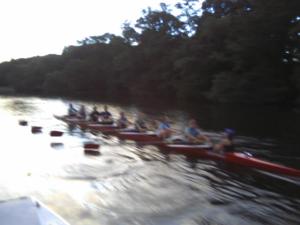 How much Strength and Power do you have?  Your score for the CF Rowing Total will be
Max Average Watts + CF Total Score.

Post your total as well as each individual result from the row, squat, press, and deadlift to comments.  Report the max average Watts for the best Row.

What do you think? Post comments here: Cancel reply

This site uses Akismet to reduce spam. Learn how your comment data is processed.